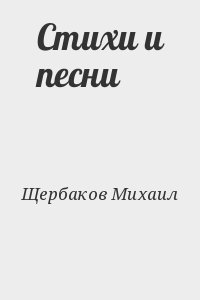 SCHERBAKOV, Mixail Konstantinovich, born 1963 in Obninsk. Entered Moscow University, Department of Philology, in 1982; graduated in 1988 (major in Russian Language and Literature). Writes poetry and songs since 1979 (the earliest records of existing are dated 1979). Wrote over 300 songs and poems.

The early songs by Scherbakov are influenced by Vysotsky and Juliy Kim (the latter is his close friend. Scherbakov plays the second guitar on Kim's LP "Ryba-Kit") Now he is more and more unlike any other "bard" or poet. "Песни Щербакова это отдельный жанр искусства", one of his fans said. The music of his songs has very unusual harmonies with dominating "minor" (moll? ) chords which make it easily recognizeable after you have acquainted with it.

If you visit Moscow, you have a good chance to hear him - he performs approximately once a month somewhere. ? koncerty.txt

4 books of his poetry were issued:

Also a selection of his poetry was published by "Znamja" monthly in February (? ) 1992.